On December 2, Sinkhole walked around campus to interview students and take photos of their bookshelves.

We first stopped at a Foss Hill dorm and interviewed Jennifer Gagné, a house manager for Res Life and a publicity assistant at Wesleyan University Press. The following books are chosen and described by Gagné. Enjoy, but know, as Gagné said at the end of the interview, “These were actually kind of hard to talk about because they’re all pretty intense and sad.”

We Are Okay by Nina LaCour: This is a YA novel about a girl who stays on her college campus during winter break. It was funny because I read it when I was alone on campus during spring break. It very well depicts what happens when everyone leaves campus. You stay in PJs, turn on the rice cooker, and subsist. The book is about the quiet of winter break and about getting the time to reconnect with yourself.

History of Wolves by Emily Fridlund: What haunts me about this book is the fact that the main narrator, who’s telling the story as an adult about her childhood, is so disassociated. She’ll casually mention how her parents weren’t really parents to her, that she raised herself, and how normal that was for her.The book tells a series of intense stories in which the narrator refuses to acknowledge how these traumatic things have affected her.

Imagine Me Gone by Adam Haslett: A man, right before he is meant to get married, is hospitalized for a suicide attempt. The couple still gets married…so we have an ominous beginning. The couple has three children together. After the father dies, the story is about how these children live without their father as a result of his horrible depression. Specifically, one of the children inherited the father’s mental illness so the book is about how the family deals with that. 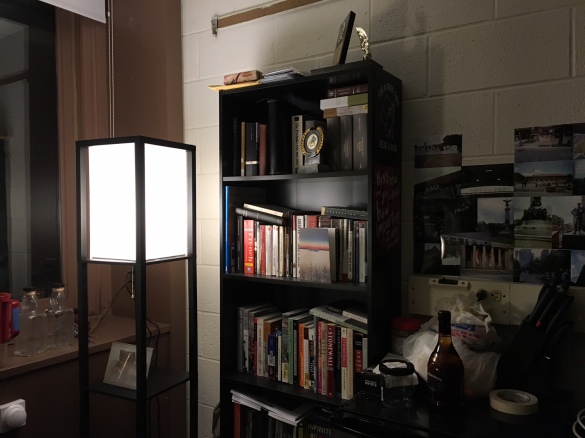 Last year, 2016, in August, I left Georgia [where I lived for ten years] for the last time. I was coming back to Wesleyan with all I had, and at the time I only had one box of books because I had to cut down for the move. I finally opened that box of books in the beginning of 2017 because a friend asked why I had all my books boxed up in a corner of my room. The same friend started giving me books, and I began to acquire books on my own. So in 2017 alone I went from one box to three full boxes and four half boxes of just books. I let myself get comfortable with owning books again. It’s not excessive, it’s not a bad thing. Because I moved a lot as a kid, I didn’t own a lot of books because the first thing to go when you’re moving is books. At Wesleyan, I’ve tried to find ways to feel more at home, so this summer I went to Ikea, bought a bookshelf, and put it together. It made me feel accomplished, like I have my life together. I also have a stack of library books because those are free. Having a book collection, for me, means I’m coming back into something I once loved but didn’t have the capacity to maintain because of how I grew up…so yeah, poetics.

Gagné’s favorite bookstore: The first used bookstore I ever went to, The Golden Bough, in Macon, Georgia, which is where I went to high school. Come a certain point, I went so often that the owner of the store knew me and knew what kind of books I liked. 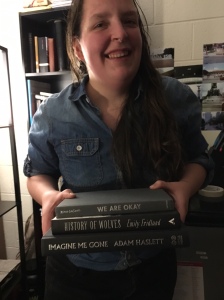